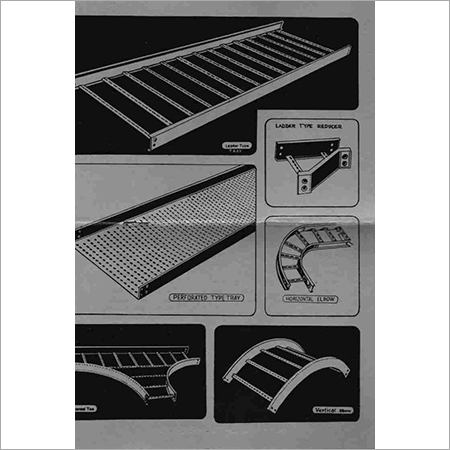 Cable Trays & Accessories
Send Inquiry
Product Code : 24
Product Description
If other than above mentioned widths are required the Trays can be fabricated as per the specification of Customers / Customer Consultants.

All Cable Trays are of standard length of 2500 mm for various widths – minimum being 50 mm wide and maximum 1200 wide. Slotted rungs are welded to the side runners at every 250 mm or 300 mm interval. At both the ends of the Cable Trays three or four circular holes are provided for connecting the adjacent Cable Trays or Accessories by Couplers Plates.

Aluminium Ladder type Cable Trays are fabricated out of Aluminium Sheets conforming to IS: 737, 1986 with thickness varying from 2 mm to 3mm.

Procedure of fabrication is similar to that of M.S. Trays but welding is done by TIG machine & Aluminium filler Rods. Fabricated Aluminium Trays are washed in Caustic Soda to remove the carbon deposits.

Ladder Type Cable Trays are fabricated in which M.S. Angles are used as runners and M.S. Flats as rung, spacing is 250 mm for 2500 mm Length Cable Trays and 300 mm for 3000 mm Lengths. Rungs can be provided single / double, as per the customer’s choice, double rungs are provided with a cap of 10 mm, for clamping the cables.

The Cable Trays and Accessories shall be Hot Dip Galvanized after fabrication as per IS: 2629, 1985 & IS: 4759, 1984. Amount of zinc deposit for Trays and Coupler Plates shall be maintained as per the IS table.

Our Products
View All